Official websites use .gov
A .gov website belongs to an official government organization in the United States.

Micro-purchase: Do one thing well

Though we pride ourselves on our transparent and remote-friendly workplace, our project focus tends to inadvertently silo engineers from each other. Rather than wait for knowledge to naturally diffuse through team changes, we try to kick-start this transfer through shared interest groups, tech talks, and documents highlighting some of the more interesting design decisions our developers have made. Today, we’ll focus on some of the core architectural philosophies behind the Micro-purchase project.

Contracting for software is often an arduous process; we wanted to make this easier. More specifically, we wanted to create an online marketplace for contributors to 18F open source projects. Though it’s passed through many forms (including a proof-of-concept Google form, a Ruby Sinatra app, and the current Ruby on Rails app), we have effectively built powerful, custom auction software, complete with bidding restrictions, access control, and an admin panel. Along the way, we’ve taken a strong stance on the topic of responsibility: we want each object to be responsible for one chunk of logic – to do one thing well.

Rails takes a very strong stance on the separation of models (i.e. data), views (i.e. markup), and controllers (which translate user actions into data manipulations). Often, this leads to so called “fat” models, “skinny” controllers and “thin” views, meaning the majority of the business logic lives within the models. In this architecture, models are responsible not just for loading/querying data, but also handling data transforms, encoding business logic and state transitions, etc. Models have too many responsibilities.

A better strategy is to give each component a single responsibility. Rather than add scoped queries to our models, we add Query Objects, which encapsulate the exact query parameters we need. Rather than placing business logic within models or controllers, we use Service Objects, which each handle a major function of the application. Instead of including complicated logic in the controllers and implicitly passing the results to the view, View Objects provide clear interfaces which define the methods we can use when rendering.

This approach leads to dozens of small, “plain old ruby objects” (POROs). Each fits a specific role (such as “validator,” “parser,” or “presenter”) but only handles that one function. This makes testing very straight-forward; specific logic means fewer code branches. Further, objects of the same role share a similar position within the repository tree and class name, creating a form of standardization across the project.

In our app, different users should see different content, including slightly different chunks of markup. “Guests” receive a welcome message while normal users won’t, for example. We could program that sort of logic into the view (i.e. markup template) or add the logic in the relevant controller, but both approaches would be difficult to maintain and particularly challenging to test. Instead, we create “View Objects”, POROs with very clear interfaces for exclusive use within views; they also contain the logic relevant to permission checking, markup selection, etc. Combined, the clean interface and focused logic resolve our troubles around testability.

As we’ll describe in detail later, there’s also a need to surface the same functionality through multiple interfaces (e.g. browsers and multiple versions of an HTTP API). Adding that logic to a controller or view is not an appropriate choice. In addition to the reasons mentioned above, this approach limits reusability: each of the interfaces would need to call into that controller or inherit from it. Placing the logic in our models is also not ideal, as most of these actions involve multiple models. Here, “Service Objects” provide a cleaner alternative. They pull the functionality into separate libraries which can be referenced by multiple user interfaces. Further, as each object is responsible for exactly one action, we can list the major functions of our app by listing a single directory.

Let us finally consider how these POROs compose. Individual auctions will have different business rules: some may only apply to small businesses, some may allow multiple bids, etc. Each auction has a combination of these traits; we might naively implement this through classical object-oriented inheritance, but such an approach isn’t feasible and leads to a combinatorial explosion as new options are added over time. We could encode each bit of logic with a switch-case/if-else; this makes finding the logic easy but explodes the size of our classes. To account for both problems, we represent rules as POROs. Auctions defer to their specific combination of rules, which are each represented by this single-purpose “Rule” object. We also make routine use of dedicated “NullObject” classes, which eliminate the need to explicitly check if an object is nil – for instance, a NullBid object with similar methods to the Bid model is returned when the auction’s winning bid is not available. Do you notice the trend? 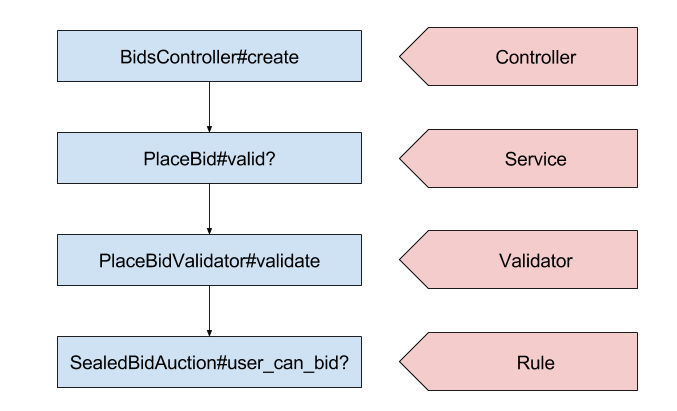 As with any design decision, the PORO approach has trade-offs. While we gain laser focus, it can be difficult to find the objects most relevant to day-to-day maintenance/feature building. With multiple levels of wrapping, delegation, and indirection, we might need to hop through several files before we figure out where certain functionality is defined. Similarly, a single pull request might change 15+ files to add a small feature. These levels also make determining object types challenging: is this auction variable an ORM record? A View Model? A Service? Stack this with rail’s implicit imports and our naming scheme becomes ever more important.

Though still a pain point, we have several strategies for mitigating these issues. Obviously, familiarity with the code base and similar practices on other projects reduces confusion substantially, but we have a few other tricks. We try to name classes consistently (e.g. “DcTimePresenter”, “SamStatusPresenter”, etc.) to encode their function, though the resolve to do that thoroughly has waned. More importantly, classes that perform the same “role” are grouped together within the code base. All presenters live in a folder separate from all serializers separate from all validators, and so forth. Knowing what role you are looking for, then, gives you a big clue as to where to find it.

We’ve also considered some alternative solutions to this organization problem. Ruby’s namespaces might help, but we’ve been bit by unexpected application outages due to the interplay between namespaces and Rails’ automatic path inclusion. An inverted approach, where presenters, decorators, etc. are organized first by a shared data type wouldn’t work for this particular application, as the logic is too tightly bound. That said, we may split the admin interface off into a separate module using this strategy in the future.

The Micropurchase app has been built with multiple consumers in mind. The majority of our existing users are browser-based, meaning that they navigate the system’s user interface through Chrome, Edge, Firefox, et al, placing bids by clicking buttons, typing text, etc. However, we also anticipated (and have realized) API users: those who access our system via automated tools. For example, vendors may want to be notified of all auctions within their technical domain, to automatically bid, or perform other non-UI-driven actions. Our challenge is to keep the two interfaces, browser and machine, in sync, so that both have the same capabilities.

The initial solution was to have a single controller handle both types of requests. The controller could perform queries, save new data, etc. but vary the format of response based on the request’s “accepts” header (i.e. content negotiation). If the same endpoint served all requests, we ensured functional parity, or so the thinking went. Unfortunately, the shared controller strategy assumes that there is a direct mapping between the functionality web-browsing and API users want. This is not safe; machines generally want clear compartmentalization while humans want pages to stitch together multiple types of content. Consider pagination, alone; end users typically reject hundreds of results on a single page while API users would generally prefer them. Adding this logic to the controller leads to lots of if-thens and different code paths – exactly what we wanted to avoid. This becomes even worse when granting the possibility of multiple API versions.

Instead, we want to think about the API as a separate product. We considered writing in an API-first style (where our webapp consumes our completely-distinct API), but decided against this due to startup cost. We didn’t know what the product would be doing, so creating a good API would be difficult. We also didn’t want to manage multiple apps (potentially multiple servers) at the offset. We also rejected developing a single-page app (which would enforce the API vs UI separation) due to compatibility concerns, issues around client-side authentication, and team familiarity with Rails. Our solution? Service Objects! Each interface (web UI, API versions) call into shared Service Objects (which contains all of the shared code); the controller just needs to convert the input/output as appropriate. 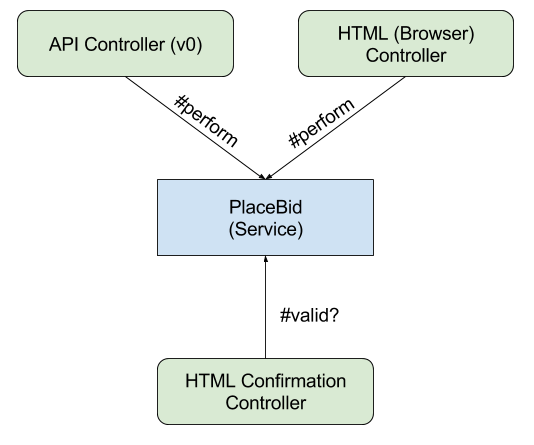 While we didn’t want to create a single-page app, we knew we’d leverage “progressive enhancement” to make more usable interfaces, particularly around our report system. Progressive enhancement can be a murky topic, however, particularly when applying it to dynamic interfaces. Which logic should live with Rails, which should live in JavaScript, and should any be duplicated? The principle of single responsibility gives us some rules of thumb to help answer this question. Logic specific to an interactive interface (e.g. around sorting results, formatting graphs, etc.) should live in JS as that’s JS’s sole responsibility. Business logic, however, must live within Rails (specifically, the Service Objects) as that’s their raison d’etre. Despite some potential value for API users, the interactive logic doesn’t fit the API’s purpose, so we keep them separate. We must admit to one major risk with this strategy: siloing by discipline often leads to redundant code and more importantly, can harm team morale. Ideally, no developer has single “ownership” over any chunk of code, despite our do-one-thing-well theory.

In the testing realm, the single-responsibility focus has influenced our stance on behavior driven tests. Written in Gherkin syntax, these tests are hypothetically useful to folks who aren’t able to read lower-level tests (i.e. non-developers). Though there’s potential for leveraging these when discussing with bureaucrats in the future, we’re not confident in that pay off. These tests are problematic in large part due to the annoyances of mixing testing and parsing logic. Before we can write a test, we need to define the steps in our Gherkin scenarios, which often requires writing implementations of those steps as well. BDD tests conflate those tasks, which seems at odds with our single-purpose stance. Further, Gherkin lacks established style guides; while we’ve created our own, we continue to be challenged by minor variations in these steps such as “When I sign in” vs “When I log in” vs “I am logged in”. Combine this with our uncertainty around specific value to our users, we are considering removing these tests.

We’ve now seen some of the implications of following a core philosophy throughout a code base. Designing with focused, single-purpose POROs makes testing easy and can standardize a vocabulary within a project. Dozens of small classes can be difficult to navigate, but the approach works with a diligent team. In particular, placing core application functionality in separate libraries makes supporting multiple interfaces a snap. We’ve also discussed how this principle can be applied to the division between front-end and back-end as well as BDD-style testing. We ask you now, do your modules each do one thing this well?

This document is the distillation of an architecture discussion between Alan deLevie, Jacob Harris, Brian Hedberg, CM Lubinski, Atul Varma, and Jessie Young. Many thanks also to Kane Baccigalupi for early technical leadership on the project. For more information about the Micropurchase project, see https://micropurchase.18f.gov/, their GitHub repository, and thoughts around limiting technical debt.